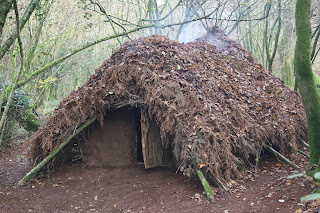 
“Not a single nail or screw in it mate” boasted the bloke at the reclamation yard. I looked the heavy oak door up and down. It consisted of several large planks, clearly oak by their grain pattern, all bearing the marks of hand hewn timber. The rippled surface, probably made that way by an incredibly sharp side axe or fairly flat adze was as dark brown as very old oak should be and polished smooth by a mixture of exposure to the elements and centuries of grubby hands pushing it open and pulling it shut. Here and there, where the oak planks were deemed already too thin to remove any more shavings by the craftsman, underlying saw marks could be seen. A motor driven circular saw would have left curved, arcing marks but these were parallel and irregular. “Pit sawn” said the reclamation yard owner and then proceeded to tell me all about where the phrase ‘being the underdog’ came from (I already knew this but listened politely).  Every single plank was fixed side by side to two horizontal bracing bars top and bottom. As the owner had quite rightly pointed out, not by nails or screws but instead by drilling a hole through both components and fitting a round peg, splayed at each end with a hard wood wedge, then cut flush to tidy it up. The two horizontal bracing bars, also hand hewn were securely dovetailed, pegged and wedged into a sturdy oak post on one side which protruded above and below the door. These protrusions were rounded at the ends and also polished smooth through wear. “This is the clever part” blurted the owner, sensing a deal was on the cards, “these rounded protrusions sit inside a carved socket, top and bottom on the inside of the door frame and that’s yer hinging mechanism. Clever eh? Must’ve had to keep ‘em greased though, with a door this heavy!”

I was fascinated, the whole door consisted of wooden components, hinges, fixings, everything… made entirely using hand tools. I tried my hardest to look nonchalant about the whole thing but there was no way I was leaving without that door! After parting with a small fortune I scurried home with my new workshop door vowing that I could make back the extortionate cost by working extra hard over the next few months. Unbeknownst to me at the time, this impressive example of rural craftsmanship from a bygone era was to become the inspiration behind many of my experimental bushcraft projects for it showed exactly what can be achieved with an open mind, a modest tool kit and a working knowledge of both raw materials and the age old techniques required to do something useful with them. This self-sufficient mind set combined with a desire to push boundaries, always striving for betterment is in many ways, the perfect summing up of my own interest in bushcraft and traditional skills. 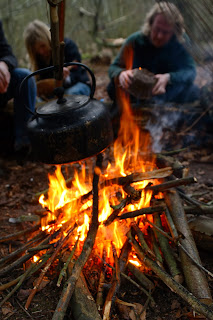 Anyone with any knowledge and practical experience of constructing shelters in the woods knows that building the door first is a very back to front way of going about the task in hand. Adding a door to your shelter is a great way of improving it’s efficiency, keeping heat in and foul weather out. The fire draw is improved sending the smoke straight up and out through the smoke hole while shutting out the draught reduces firewood consumption dramatically. Having the ability to construct a door will make your shelter feel like a home, but…from a survival point of view, your first priority has to be getting a roof over your head and providing immediate protection from the elements. On this occasion however, due to the experimental nature of the build and the fact that there was no-one around to tell me otherwise, I decided to invest my time in making a sturdy door that would hinge open and closed and last for a fair few years.
This was an exciting prospect! Making a hinged shelter door that echoed the craftsmanship of my beloved and ancient workshop door, completely free of any metalwork or iron fixings is an itch I’d been wanting to scratch ever since I’d clapped eyes on it at the reclamation yard years before. With only a minimalistic set of tools, this would be a real challenge. In fact, the only concession to the tools I normally carried with me in my pack for long trips (small sheath knife, folding pocket saw, small crook knife, homemade folding bucksaw and a Swedish axe) was a traditional hand operated bit brace for drilling holes. The ability to drill holes in wood launches your woodland joinery forward several centuries, enabling the construction of proper pegged mortise and tenon joints, uniformal and speedy joints for chairs, benches and stools, in fact any number of ambitious carpentry antics. My previous attempts at improvised hole drilling in wood had included burning holes either with carefully managed hot coals or by rotating a hard wooden spindle until a charred hole was formed. Clamping a triangular section of flint and even a metal drill bit in the spindle of a bow drill set had also worked well enough but all these methods were time consuming and exhausting. I concluded that if I ever embarked on an expedition where some fancy furniture for camp would be required I would quite happily pack a bit brace in my pack and suffer the 3lb weight penalty. Otherwise, I’d just lash stuff together.  So, with the addition of the bit brace well and truly justified (in my head anyway) I set to work. 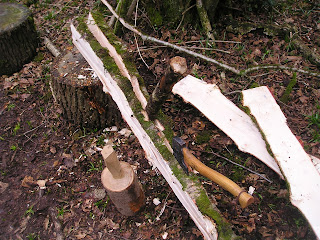 The hinging post had been left to protrude a good hands width from the top and bottom of the planks. Both protrusions (we’ll call these hinge nubbins) were then rounded off and whittled as smooth as possible to reduce friction as the door swivelled open and shut in it’s frame. I wasn’t sure how the frame would be built into the shelter at this point so I selected two sturdy, seasoned hazel logs to form the all-important top and bottom pieces (lintel and sill) which would clamp the door in place. These were left overly long to be built into the shelter framework at a later date. A bit of nifty crook knife work later and both sill and lintel had a smooth, hollow socket ready to accept the rounded protrusions on the hinging post. With frame pieces temporarily held in place clamping down over the hinge nubbins, the door creaked open and shut with a noise befitting of your average haunted mansion! Suspecting some binding in the bottom socket I hunted around in some nearby flint knapping debris and found a nice little disc which fitted the base of the socket nicely. Now, with nubbins held in corresponding sockets and the full weight of the door sitting on a smooth flinty surface, it swung back and forth beautifully. 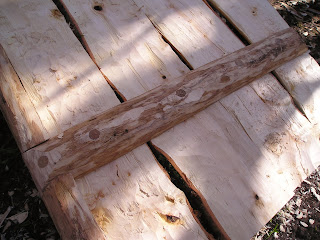 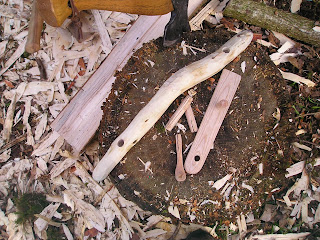 By way of an encore and now fighting against the setting sun, I whittled like fury to knock out a pleasantly curved door handle and thumb type latch before nightfall. Using my head-torch as a makeshift stage light I proudly leaned the solid plank door against a tree to observe my work, a fitting homage to the unknown craftsman who had toiled away on my workshop door centuries before. I think he would’ve been chuffed to know that his work had inspired me several lifetimes later. Having to stop work and sleep now seemed unfair. I almost couldn’t wait to get started on the rest of the shelter so that my new door could have a purpose in life. Images of how the finished shelter might look filled my head - walls of woven hazel, strong sloping rafters stained black with wood-smoke supporting a thick thatch of leaves and bracken, room to stretch out, sleep, cook and work. A home for all weathers made from nature, using only the tools in my back pack and the knowledge in my head. The true essence of bushcraft! 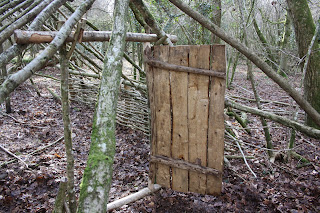 The finished and hung door. Note the hinging design - protruding nubbins clamped between two carved sockets on the fixed frame. While you're looking at it check out the integral top brace, the natural sun shoot from the fallen hazel which became the hinging post. Took me ages to find that...
Tune in for part two tomorrow to see the finished shelter and a step by step account of the build. 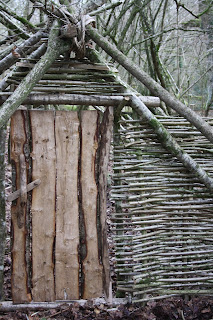 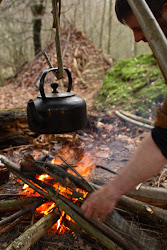 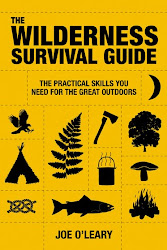 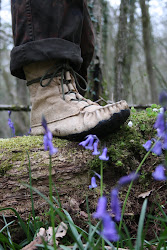 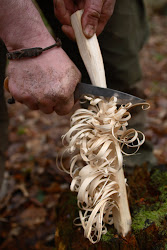 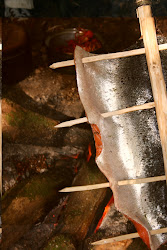 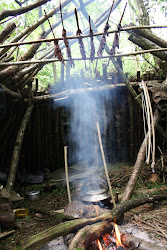 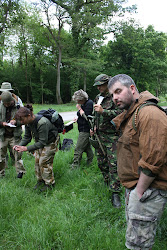 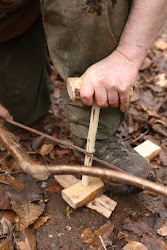 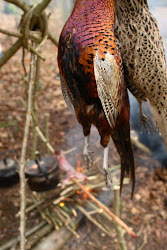 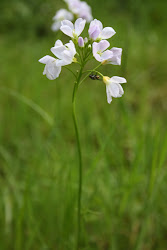 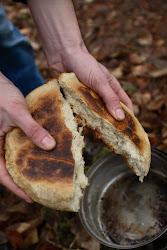 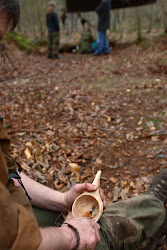 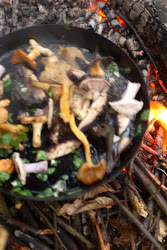